International Conservation and Sustainability: The role of UK Higher Education

A review of the CASCADE panel discussion launch event

An exciting new partnership among UK higher education institutions (HEIs) was launched at an online event co-hosted with the All Party Parliamentary Group on International Conservation on Monday 14 June. Its aim is to use the country’s world-leading expertise in people-focused biodiversity conservation to support the development of principles, policies and practices that meet biodiversity goals in the UK and globally in an equitable, socially-just and inclusive way.

In his introduction to the event, Prof. Richard Davies, Pro-Vice Chancellor Global of Newcastle University (hosting the event), noted the timeliness of this interdisciplinary initiative drawing on members from 22 UK universities and research institutions, to tackle the urgent global environmental challenges we face. He called on researchers to join together to help develop the principles, policies and practices we need to do so.

The CASCADE* launch event was chaired by Theo Clarke, MP, co-chair of the All Party Parliamentary Group on International Conservation, who brought the urgency of the environmental crisis home vividly by referring to recent research showing that the current rate of biodiversity decline in freshwater ecosystems outpaces that of the end-Cretaceous extinction that killed the dinosaurs. She noted how Lord Stern’s seminal study on the economics of climate change had created a new consensus and political will among politicians to act on the climate crisis – and argued that the CASCADE initiative has the potential to deliver a similar step change in biodiversity policy making. For this to happen, we need to bring together the greatest minds to help dig us out of this crisis, and provide access to this expertise to the end users, including politicians and businesses around the world. Noting that over 75% of diseases in humans are zoonotic, with most originating in wildlife, Ms Clarke argued that we need science, research and innovation to get us through. She expressed the hope that the launch of CASCADE heralded better communications between academics and policy makers. It is certainly an auspicious moment to make the attempt, with major international gatherings focused on the environment forthcoming this year in Glasgow and Kunming.

E.J. Milner-Gulland, Tasso Leventis Professor of Biodiversity at the University of Oxford and founder of the CASCADE initiative, then chaired a panel of high-level end-users of academic input on environmental issues. Emily McKenzie, Head of Evidence and Policy, Dasgupta Review on Economics of Biodiversity, discussed how the review used peer review, calls for evidence, teach-ins and meetings, and stressed the importance of interdisciplinary working and flexibility, including the involvement of applied research institutions.

Jyoti Mathur-Filipp, Director, Implementation Support Division, at the Convention on Biodiversity Secretariat, discussed the importance of academic research inputs to the work of the Convention in developing its 30-year framework. She looked forward to input on identifying gaps in the framework, on a range of issues including understanding ecosystems and populations of marine and terrestrial wildlife, habitat connectivity and the proportionality of protected areas. She identified capacity development as an important dimension of the CBD’s work, including supporting access to and equitable sharing of genetic resources.

Maxwell Gomera of UNDP in Rwanda described his long association with UK institutions, comparing the current crisis to his first exposure to international coordination of efforts to respond to the economic crash in 2008. Acknowledging there was no ecological bailout for biodiversity collapse, world leaders looked to academic input, the outcome being the Global Green New Deal. Describing the calamitous impacts of covid-19 on Rwanda’s previously fast-growing economy, he warned that this had significantly reduced the government’s capacity to protect biodiversity, a problem shared elsewhere. He called for cooperation to develop visions of the future in which jobs could be generated without overly taxing the environment. He worried that it would be hard to justify setting aside 30% of land for nature in the face of huge demands for land across Africa. Finally, what kind of economics could deliver on such a vision for nature and human wellbeing?

Dr Vinod Mathur of the National Biodiversity Authority of India called for evidence-based science to provide a robust basis for initiatives like the call to protect at least 30% of lands and seas. To deliver on this, conservation needed to reach beyond the biological sciences, and universities had to ensure that researchers didn’t remain trapped in their disciplinary silos. Researchers needed to partner with businesses, and expand research partnerships, with a focus on environmental policy that transcended narrower foci on biodiversity, or climate, or land degradation. Dr Mathur called for greater networking between universities within and beyond UK shores, to encourage academic mobility.

Following this stimulating first panel of end-users, Dr Mike Barrett, Executive Director of Conservation and Science for WWF-UK, introduced a second panel, of researchers. In addition to two UK-based researchers from CASCADE, it included representatives of overseas universities in Ghana and Brazil. Dr Colin Clubbe, Head of Conservation Science at Royal Botanic Gardens Kew and a member of CASCADE, began with a reminder of David Attenborough’s comment at the recent G7 summit in Cornwall that we could be “on the edge of destabilising the entire planet”. The challenge, Dr Clubbe argued, is to better respond as a research community – to marshal our activities to meet the end user needs. He outlined how Kew works as an institution focused on applied research, working closely with DEFRA in the UK, and collaborating with end users and researchers around the world on projects like the Millennium Seedbank Partnership.

Professor Christina Hicks, of Lancaster University and a member of CASCADE, discussed how drawing on both scientific and other kinds of knowledge systems is vital, using her work on marine conservation and the importance of aquatic foods in addressing malnutrition as an example. She noted the importance of successful relationships and trust in building the partnerships we need to tackle our current global environmental challenges. She emphasised that such relationships take a long time to build, and require a long-term vision to sustain. There is a diversity of disciplinary voices within academia, and there will be disagreements, which are important ways to stimulate debate and come to better understanding. Professor Hicks recommended co-developing transformative research agendas, pointing out that many local and indigenous communities already practice conservation, and can teach us much. We also need to acknowledge the history of violence towards these communities, and be respectful and patient in building collaborations with them. Scholarships and exchanges to encourage people from these communities are important tools for better and more equitable exchange.

Professor Jean-Paul Metzger of the University of São Paulo in Brazil strongly agreed that a collaborative environment is important for tackling our global environmental challenges. He made a strong case that this collaborative effort should be international, connecting the global north and south, with consideration of different cultural contexts. He suggested this could be catalysed through joint research calls and collaborations, staff and student exchanges, and setting up boundary institutions where academics and stakeholders can meet to discuss, explore, find gaps, build trust and co-design solutions to particular environmental challenges.

Professor Yaa Ntiamoa-Baidu of the University of Ghana described how research collaborations between Ghanaian and UK research institutions begun in the mid-1980s had over the long term blossomed into important conservation initiatives for the protection of nature in Ghana. In addition to the establishment of key conservation policies and the creation of protected areas, these long term partnerships had considerably increased the number of Ghanaian experts in areas like ornithology. Another important partnership between UK and African institutions on the role of bats in the transmission of infectious diseases in Africa had generated significant funding for research and training for African participants. However, she cautioned that such deeply worthwhile and mutually beneficial collaborations and networks require huge investments in time and financial resources.

Theo Clarke MP then posed questions from the (virtual) audience to all of the panellists. Jyoti Mathur-Filipp responded to a question on how to ensure conservationists engage with marginalised communities, explaining how the CBD works with indigenous and local communities to ensure their voices feed through into the convention. Professor Mathur-Filipp noted that in Ghana local communities are fed up with being the subjects of research, and want to know how conservation will benefit them? Maxwell Gomera commented that while many overseas people took an active interest in deciding the future of wildlife in developing countries, few stepped up when it came to providing alternatives to locals who must coexist with wildlife. Dr Colin Clubbe spoke on the importance of capacity development, citing the networks emerging from students trained by Kew, and how these are helping to spread a conservation message.

Theo Clarke MP concluded by thanking the panellists for a stimulating and wide-ranging discussion. Noting that the UK Prime Minister is very passionate about Nature, she expressed the hope that the UK government will put Nature-Based Solutions at the top of the agenda at the UN Climate Change Conference in Glasgow in November. She referred to the Government’s ambitious 25-year environment plan, and said that as an MP she was encouraged to see government departments working together on key environmental challenges including combatting the illegal wildlife trade and preventing habitat destruction. Her takeaway message from this CASCADE launch event was that universities are key partners to help shape and implement environmental policies, prevent future pandemics, and make the case for action to politicians. 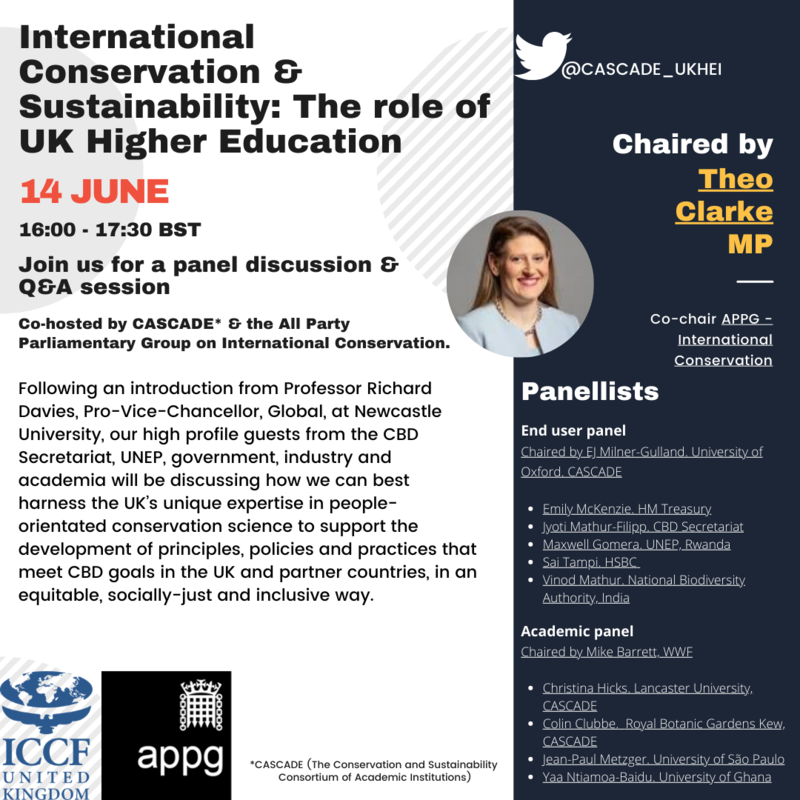